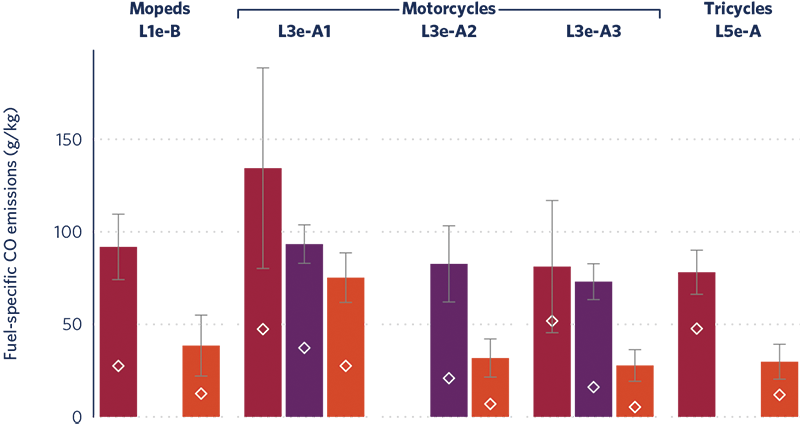 Two and three wheelers have high emissions per gram of fuel used compared to many cars. 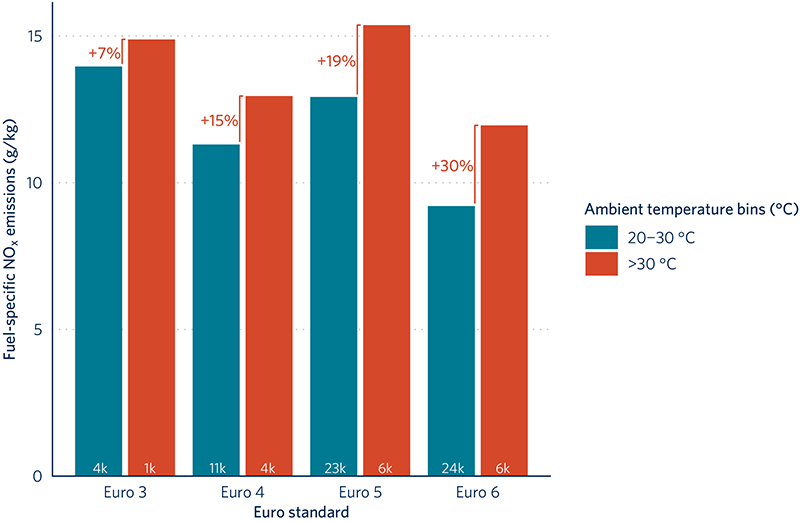 Average NOx emissions from diesel cars, in grams per kilo of fuel consumed.

New data from real-world emissions testing shows up to a 30% increase in nitrogen oxide emissions from diesel cars at higher summer temperatures and reveals motorcycle emissions of certain pollutants “greatly exceed” averages for both petrol and diesel cars.

Measurements of the real-world NOX, particulate and CO2 emissions from over 180,000 vehicles - including L-category vehicles and buses – were taken at three Paris sites in summer 2018 with the support of Mayor Hidalgo’s office.

New data highlights the ongoing impact of the dieselgate scandal, and confirms real-world NOX emissions are systemically much higher from diesel cars, and that this holds true for most of the newest (Euro 6) models. The results show that the excess emissions from diesel passenger cars in particular - which previous TRUE results show produce up to 18 times EU limits – rise in higher temperatures, amplifying the severe health and environmental impacts of excess emissions.

Motorcycles and other L-category vehicles (read the fact sheet here)

The data has also been incorporated into TRUE’s rating system, an innovative and interactive database which ranks light-duty vehicles on their emissions, which now has data from over 1 million vehicles across Europe.

TRUE has used the International Council on Clean Transportation’s (ICCT) methodology to create a traffic-light rating system which ranks cars based on their real-world NOx exhaust emissions.

Paris is the second pilot city to work with TRUE to assess real-world emissions challenges, following London in December 2018. Other cities will be added to the rating system in the future, to enable cities to identify their key emissions issues.

Sheila Watson, Deputy Director of the FIA Foundation, commented: “Dirty diesel vehicles have knowingly been manufactured and sold for decades and these excess emissions alone are responsible for some 38,000 deaths each year. These new results show the legacy of that deception and the growing challenges cities face. The unacceptable urban health burden caused by diesel vehicles increases as cities get hotter in terms of both the level of emissions and the health impact of those emissions. This poses huge implications for cities all around the world as we face hotter and hotter summers in a climate crisis to which transport it a major contributor. It also shows that two- and three-wheelers are neither the answer to urban air quality nor traffic issues.

It is impossible to future proof our cities without reliable real-world data upon which to base policies. That is why the FIA Foundation is delighted to support TRUE’s work, in partnership with Mayor Hidalgo, which we hope will strengthen the transport policy framework for cleaner, safer cities.”

Drew Kodjak, Executive Director of the ICCT, "The use of remote-sensing technology to measure on-road emissions from vehicles is already giving us a clearer and more detailed picture of the sources of air-quality problems in cities like Paris. It's striking to see, for example, that Euro 4 L-category vehicles, which qualify for the Crit’Air 1 emissions class, have high CO, NOX and PM emissions relative to other vehicle types that qualify for Crit’Air 1, and to realize that therefore the share of air pollution attributable to these vehicles could grow within the Paris LEZ as access restrictions are tightened in coming years. This is the kind of information that can inform how cities develop and refine policy, and ultimately how they can succeed in achieving the goal of a zero-emission transport sector."

Christophe Najdovski, Paris Deputy Mayor for transport, said: “Paris was the first French city to set up a low emission zone in 2015. The ICCT study confirms that the diesel ban is the right objective. Also we could go further to get clean air back in Paris. This is an objective that which we should all share.”

Karine Léger, Managing Director of Airparif which monitors Paris air quality, said: “The quality of the air we breathe depends on emissions, that is to say, the amount of pollutants released into the atmosphere. But there is no simple connection between the two given the influence of meteorology and atmospheric chemistry. As a result, the one-shot measurement campaign carried out by the TRUE project on a 180,000-vehicle sample in Paris provides important insights. It allows us to go further in interpreting the trends in air quality breathed in Paris with regard to emissions related to road traffic, which remains the main source of pollution in the capital.