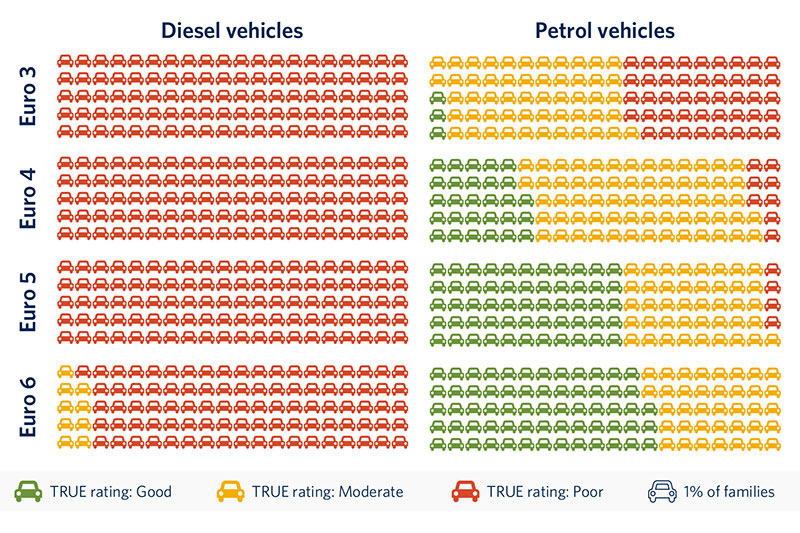 Euro 3 to 6 ratings.
The Mayor of London, Sadiq Khan, supports the work of TRUE to improve air quality in cities around the world.

Most of the newest diesel cars in European cities and throughout the continent are still polluting the streets with nitrogen oxide (NOX) emissions up to 18 times the levels set by Euro vehicle standards, says The Real Urban Emissions (TRUE) Initiative, launching its car ratings scheme and checker on 6th June.

Measurements of the real-world emissions of over 350,000 cars on the roads in Europe, have been used to create an innovative and interactive new database ranking vehicles’ NOX emissions.

TRUE has used the International Council on Clean Transportation’s (ICCT’s) methodology to create a traffic light rating system which ranks cars based on their real-world nitrous oxide (NOx) exhaust emissions. Green is a ‘good’ rating, yellow is ‘moderate’ and red means that a vehicle produces more than 180 mg/km of NOx and is ‘poor’. Anyone can search for the TRUE rating of a car by make, model, engine displacement, fuel type, and Euro standard.

The results confirm that real-world NOx emissions are systemically much higher from diesel cars, and this holds true for even the newest (Euro 6) models. All Euro 6 petrol cars, in contrast, received a ‘good’ or ‘moderate’ rating. Key findings for Euro 6 vehicles, the newest fleet of European vehicles were:

The TRUE rating system uses data collected across Europe in the CONOX project, which was funded by the Swiss Federal Office for the Environment. It is the largest collection of data on vehicles emissions in Europe to be brought together so far. The measurements of the 375,000 individual cars from this data set have been used to create the TRUE ranking.

Further data from testing undertaken by TRUE in London and Paris will be added to the rating system in the future.

TRUE is a partnership of the FIA Foundation, the International Council on Clean Transportation, the Global New Car Assessment Programme, Transport and Environment, and C40 Cities, which seeks to bring transparency to the public debate on vehicle emissions and urban air quality.

Sheila Watson, Deputy Director & Director of Environment and Research, FIA Foundation, commented:
“The impact of dirty air on those of us who live in cities is terrible - and all the more so for children who can have their health adversely affected for life because they breathe in excessive vehicle fumes when young. We are delighted to support the TRUE initiative because testing real cars on real roads, tells us what is really going on, and enables better policy and good consumer choices and helps address this awful health hazard.”

"This initial project is an important first step," said Rachel Muncrief, program director for the ICCT, "but remote sensing could take us very much further in terms of our ability to monitor, analyze, and control vehicle pollutant emissions and gain control of Europe's urban air- quality problem."

David Ward, Secretary General, Global New Car Assessment Programme (Global NCAP) said:
“After the shock of Dieselgate, when we discovered that a major manufacturer had been deliberately cheating emissions standards, it became clear that a transparent system that revealed the real emissions of cars was needed. This sort of transparency through independent testing, has been common in the world of vehicle safety for a while, and now TRUE provides real & reliable information about vehicle emissions as well.”

Mark Watts, Executive Director, C40, said: “The threat of toxic air pollution is something virtually every major city is struggling to address. We know dirty air has a massive impact on people’s health, the economy and our environment. Cities are already taking bold action but need the most reliable data to inform their policies. That’s why C40 is delighted to support the True initiative to identify the real emission levels of cars on our roads and provide a tool for city leaders to use when working out the best ways to clean the air that we all breathe. C40 is committed to helping improve air quality in the world’s greatest cities and benefit the lives of billions of people. The results show some of the newest cars are still polluting our streets at rates higher than set by European regulators, makes it clear that much more work needs to be done.”

Greg Archer, Clean Vehicles Director, Transport & Environment, added: “The TRUE rating exposes the legacy of Dieselgate - tens of millions of dirty diesels that are still on the roads producing the toxic smog we daily breathe. The rating highlights that nitrogen dioxide pollution, even from most new diesels, is well above those of gasoline cars, legal limits and manufacturers’ claims. TRUE identifies the worst performing models and regulators must act to require carmakers to clean these up. TRUE can help to ensure cheats cannot prosper.”

Read some of the coverage of the launch here: