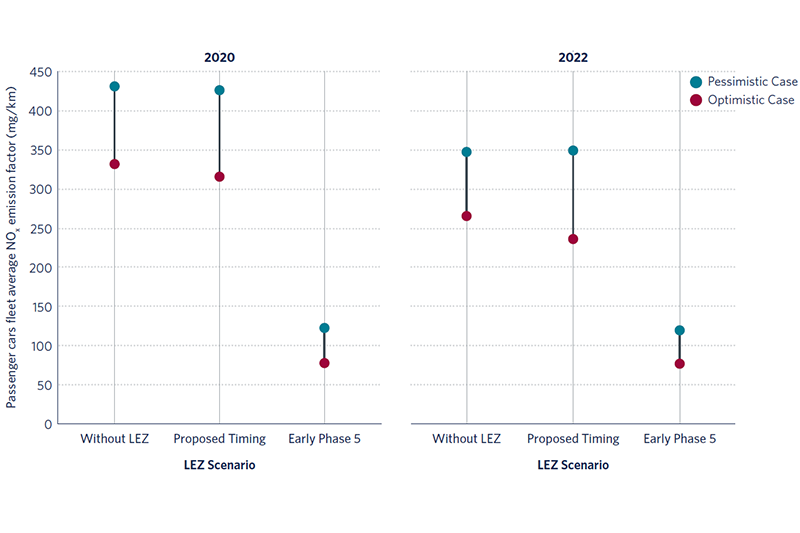 Estimated passenger car fleet average NOx emission factor in 2020 and 2022 without the LEZ, with the proposed LEZ, and with earlier implementation of Phase 5.

By 2024, Paris passenger cars NOX emissions could drop by up to 87% compared to 2016 levels, if the draft schedule for tightening the low-emission zone across the greater Paris region goes ahead according to a new report by ICCT for the TRUE Initiative, launched today, 13 March.

Paris was the first metropolitan area in France to establish a low-emission zone (LEZ) as a measure to reduce air pollution from transport. The Paris LEZ restricts access according to vehicles' classification in France's Crit'Air system, which is based on a vehicle's certification level under the Euro emissions standards and its fuel type. At present the LEZ excludes only diesel passenger cars not certified to the Euro 4 standard at minimum. The criteria for entry into the zone will become progressively more stringent from now until 2030. By 2030, under the current implementation plan, only battery-electric and hydrogen fuel cell vehicles will be permitted to enter the LEZ.

The TRUE study estimates the reductions in nitrogen oxide (NOX) emissions under the current implementation schedule for the LEZ, and under an accelerated schedule.

Accelerating the implementation of Phase 5 (in which petrol cars not certified to at least Euro 5 and all diesel cars except plug-in hybrid-electric will be excluded from the zone) to 2020 would yield a 72%–77% total reduction in passenger car NOX emissions the same year compared to 2016. Early implementation in 2022 would yield a 66%–71% reduction that same year compared to 2016.

Achieving a similar level of emission reduction without the low-emission zone and without rapid electrification would take another 7 to 10 years.

The study also found that other changes in addition to early implementation could also expedite NOX reduction in the Paris LEZ. With the substantial vehicle replacement incentives available in France, the Paris LEZ restrictions could be tightened without unduly penalizing owners of older vehicles. If excluded vehicles are replaced by ZEVs, NOX reduction rises to 91% compared to a scenario without the LEZ. And because enforcement of the LEZ in Paris currently relies entirely on visual inspections by police, automating enforcement using technologies such as license plate recognition could more effectively restrict access by high-emitting vehicles.

Sheila Watson, Deputy Director of the FIA Foundation, said: “This report, a follow up from the results of TRUE’s Paris real-world emissions testing programme launched last September, shows the significant impact targeted policies, based on real-world data, can have on vehicle emission levels.

“Cities around the world can look at the projected success of Paris’ ambitious LEZ, and develop their own policies to protect the health and wellbeing of urban-dwellers.”