The launch of a new FIA Foundation report calling for a global independent real-world testing initiative for vehicle emissions was the highlight of a busy week for the charity at the annual meeting of the US Transport Research Board (TRB).

The FIA Foundation hosted a reception at the TRB annual meeting in Washington D.C. to highlight the importance of our ‘Safe, Clean, Fair and Green’ mobility agenda. At the event, held on 11th January 2017, Sheila Watson (pictured above), FIA Foundation Deputy Executive Director, emphasised the importance of partnerships in promoting work on road safety and clean air. She  introduced two initiatives supported by the Foundation to reduce vehicle emissions and save young lives, contributing to the Foundation’s aim of a safe and healthy journey to school for every child.

The first such partnership is with the International Council on Clean Transportation (ICCT), which works closely with the Foundation as members of the Global Fuel Economy Initiative (GFEI). Sheila Watson introduced Drew Kodjak, Executive Director of the ICCT, the organisation which uncovered the ‘dieselgate’ scandal around the use of illegal cheat devices in VW vehicles. He explained how ICCT researchers had been examining the discrepancy in results of on-road and off-road tests in different vehicles in Europe and the US, leading to the discovery of the scandal. Drew emphasized the important role of regulators in enforcing compliance, and the vital need for future work to reduce the capacity for such cheating because of its impact on air quality.

The reception also marked  the official launch of a new FIA Foundation/ICCT report entitled ‘Can we prevent another dieselgate?’ The report summarises the findings from a meeting of leading researchers and vehicle emissions experts that was convened by the FIA Foundation in London in 2016. The report concludes that an independent, global, real-world emissions testing initiative is a necessary and important step towards providing improved consumer information regarding emissions. It would also help to improve regulations and compliance by highlighting where official tests deviate widely from on-road performance. 2017 will see further work on this issue supported by the FIA Foundation.

Also at the event, Lauren Marchetti, the Strategic Senior Adviser  for the University of North Carolina Highway Research Centre,  highlighted the importance of the FIA Foundation’s Global Initiative for Child Health & Mobility in promoting safe and healthy routes to school for every child.  Describing 2016 as an ‘ exciting and significant year’, she explained how the Foundation’s role in helping start Vision Zero for Kids had unlocked new action on children’s road safety in the context of ‘Vision Zero’ cities in the US. Again, the Foundation will be building on this success in 2017.

The FIA Foundation is also contributing to vital understanding of road safety and vehicle emissions by participating inTRB committees. Natalie Draisin, FIA Foundation North American Manager, spoke at two meetings of the subcommittee on global road safety, drawing attention to the 1.25 million people who die annually through road traffic crashes and the need for a comprehensive response. She presented the Foundation’s focus on protecting children from unsafe roads and polluted air through its child health initiative. 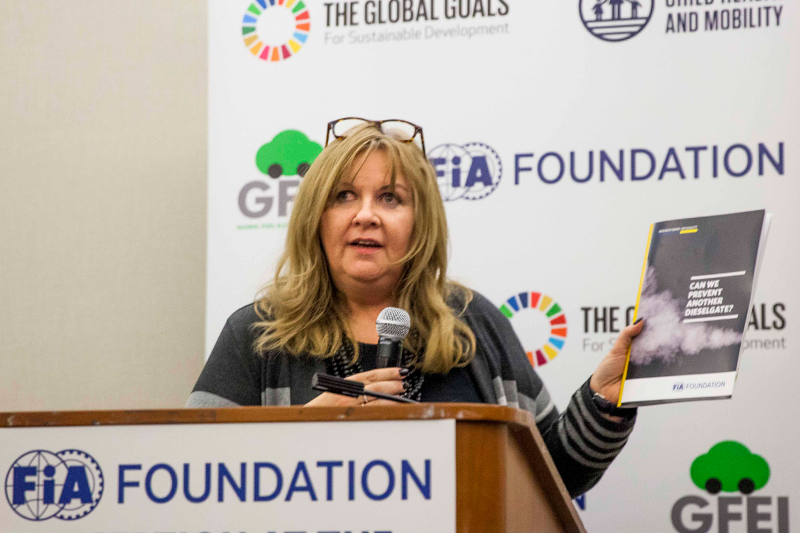