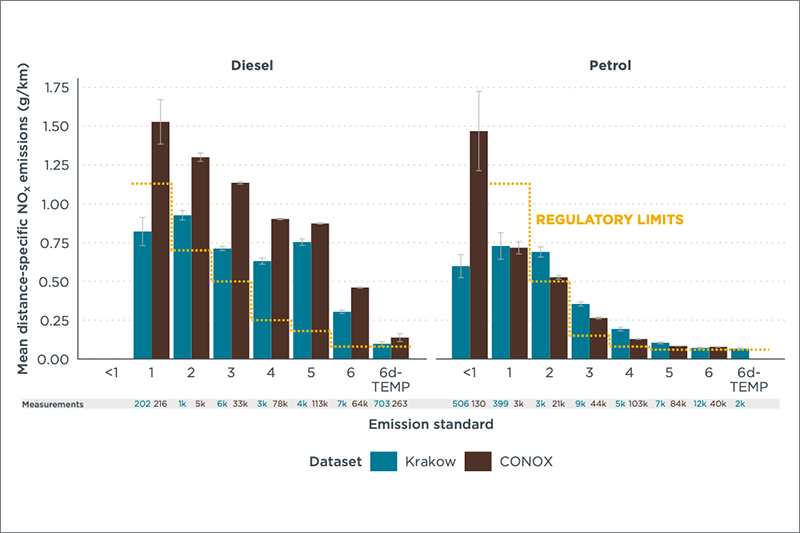 Figure 1: Mean estimated distance-specific NOx emissions from diesel and petrol passenger cars, grouped by emissions standard, for Krakow and CONOX remote sensing data. The number of measurements is presented below each bar. Whiskers represent the 95%. 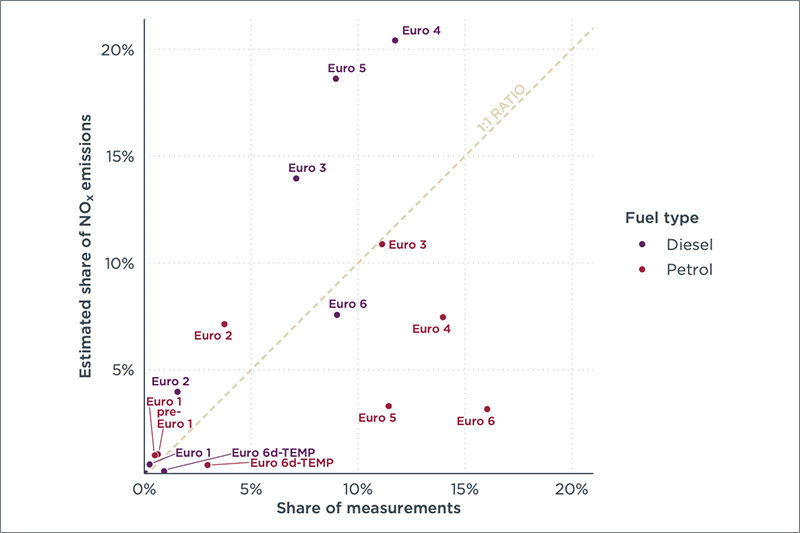 Figure 2: Share of measurements and estimated share of total NOx emissions in Krakow from passenger cars by emissions standard and fuel type. The share of remote sensing measurements is considered as a crude proxy of vehicle-kilometers travelled by each group of vehicles.

In January 2019, the city of Krakow achieved a record that is not a cause for celebration: exceeding the World Health Organization’s air pollution limits by a factor of four. While the use of coal and wood for heating are major source of pollution in Poland, on-road transportation is the second largest contributor comes in second and is the largest source of nitrogen oxides (NOx) in the country.

In response, Krakow Public Transport Authority commissioned a remote emissions sensing campaign to better understanding of the impact of motor vehicles emissions on air quality. An analysis of these measurements by the ICCT revealed not only details about the Krakow fleet and how it compares to elsewhere in Europe, but also provided some unique insights into how a specific vehicle characteristic impacts emissions: the age of the cars measured.

The fleet in Poland is one of the oldest in the European Union (EU), with an average passenger car age of 14 years, compared to the EU average of 11 years. Vehicles measured in Krakow during the campaign were, on average, two years older than vehicles in the TRUE database, as evidenced by the fact that Euro 4, type-approved between 2005-2010, was the most common emissions standard for vehicles in Krakow.

So how did the fact the fleet was older than previous campaigns impact emissions?

Diesel passenger car NOx emissions in Krakow are generally several times higher than their type-approval limit, as shown in figure 1. The exception is cars type-approved to Euro 6d-TEMP, which were within the not-to-exceed threshold for on-road real-driving emissions, but slightly above the regulatory laboratory limit. In addition, although NOx emissions from petrol cars were generally several times lower than their diesel counterparts, older Euro 2 through Euro 4 vehicles exceeded type-approval levels considerably and NOx emissions were higher than measured during previous campaigns (referred as CONOX in Figure 1).

Emission measurements from buses in the city confirmed that vehicles type-approved to newer standards had lower NOx and PM emissions than their predecessors. We found that city-run buses in Krakow exhibited the lowest fuel-specific NOx and PM emission levels. As nearly all municipal buses are operated by the same local authority, a majority of these vehicles are type-approved to Euro VI standard due to replacement vehicles being procured on a regular basis.

The higher emissions in older vehicles in Krakow are likely explained by the well-documented deterioration of petrol emission reduction strategies through vehicle aging. The two main mechanisms responsible for the progressive wear of the aftertreatment system are thermal and chemical deactivation, and via slow fuel poisoning. Unfortunately, the higher emissions documented in our study may be even more pronounced in the Polish fleet overall, which is, on average, four years older than that of the Krakow metropolitan area.

Poland has recently implemented efforts to help cities address emissions from transport. In particular, the February 2018 Law on Electromobility and Alternative Fuels allows cities to implement clean transport zone. If Krakow re-establishes its low-emission zone in the city center to exclude pre-Euro 3 and pre-Euro 6 diesel vehicles, which make up roughly 35% of the fleet and are responsible for about 67% of total NOx emissions, citizens could expect tangible air quality benefits. The city could also implement policies to encourage renewal of the entire bus fleet, not just those that are publicly owned, to further reduce pollution from mass transit. In the future, we plan to perform a remote sensing campaign in Warsaw, which we expect will provide more information to policymakers and further shed light on how aging impacts emissions.