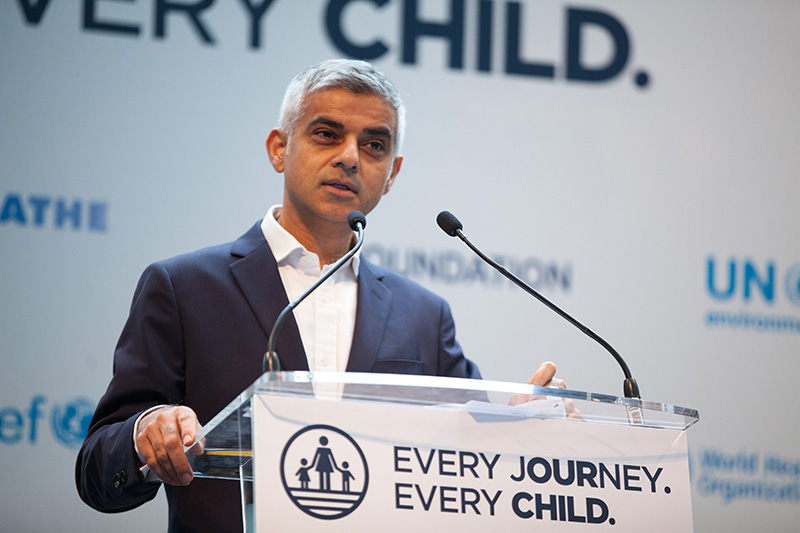 The Mayor of London speaking at the Child Health Initiative’s ‘Every Journey, Every Child’ conference at London City Hall’.

The latest policy announcements made by Mayor of London, Sadiq Khan, designed to improve London’s air quality have been informed by the findings of the recent TRUE testing of vehicles in the city.

The recent analysis, published by TRUE in December 2018, shows that real-world emissions from London black cabs are seven times laboratory limits, far exceeding passenger diesel cars. They are currently responsible for 20% of harmful NOx emissions and by 2020 they will be the biggest source of transport pollution in central London.

The new package of measures, informed by TRUE’s findings, being proposed by the Mayor and Transport for London (TfL) to tackle black cab emissions and support drivers switching to new zero emission capable taxis includes:

These measures are designed to help achieve the Mayor’s ambition to reduce taxi emissions by 65% by 2025 to improve air quality for the health of Londoners.

Drew Kodjak, Executive Director of the International Council on Clean Transportation, said “The TRUE initiative has been working closely with London's Mayor's Office to investigate the real world emissions of vehicles driving on London's roads.”
“Our analysis has found that the policies that have been put in place to reduce harmful emissions from London's bus fleet have resulted in significant decreases over the past five years. Over the same time period emissions from London's black taxi cab fleet have been on the rise. We commend Mayor Khan and his staff for taking action to address harmful emissions from taxi cabs in the city.”

The Mayor of London, Sadiq Khan said: “London’s air is so toxic it damages children’s lung growth, causes thousands of premature deaths and increases the risk of asthma and dementia. We know that dirty vehicles are responsible for half of our NOx air pollution – and this new data from TRUE and ICCT reveals the stark health impact of polluting diesel taxis on our streets. It also underlines why we at City Hall have been delivering hard-hitting, urgently needed policies to tackle vehicle emissions.”