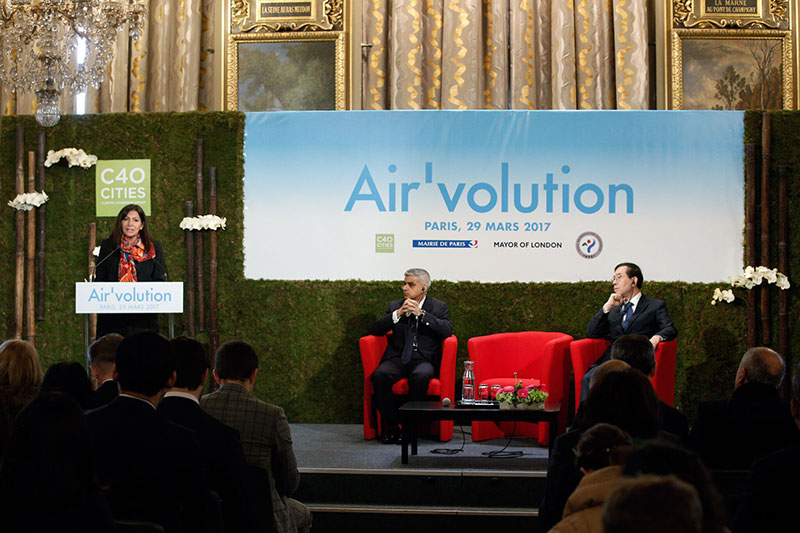 Mayor of Paris Anne Hidalgo, Chair of the C40 Group of Cities, announced the TRUE partnership at a press conference at the Hotel de Ville, Paris, with Mayor of London Sadiq Khan and Mayor of Seoul, Wonsoon Park.

Sadiq Khan: “Toxic air in London and other big cities is an outrage’. 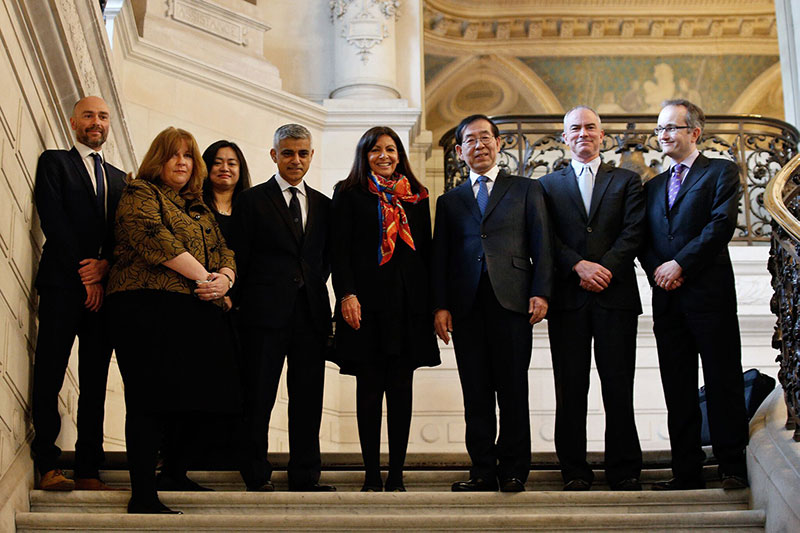 Sheila Watson and ICCT director Drew Kodjak (second right) joined the mayors and C40 and city officials for the announcement.

At a press conference in the ornate Hotel de Ville in the centre of Paris, Mayor Anne Hidalgo of Paris and Mayor Sadiq Khan of London announced today that their cities will participate in The Real Urban Emissions initiative (TRUE), a new partnership coordinated by the FIA Foundation, as part of their strategy to reduce dangerous air pollution.

Mayor Khan said: “The toxicity of the air in London and many other big cities is an outrage, and schemes of the type we are introducing in London and Paris have the potential to make a massive difference to the quality of the air we all breathe”. He said that the initiative, which uses real world testing of vehicles, would deliver the “robust and independent data needed to put an end to the smoke and mirrors around vehicle emissions”. Mayor Khan also emphasised the role that the TRUE initiative will play “in providing Londoners with an honest, accurate and independent evaluation of the emissions of most new cars and vans on our roads and on the showroom forecourt through a new vehicle emission scoring website – the Clean Vehicle Checker - the first of its kind in the world”.

High levels of vehicle emissions are a major cause of ill-health with over 9000 people dying each year in London as a result of poor air quality, with children particularly vulnerable as their lungs are still developing. The new scoring scheme, based on TRUE data, will provide information to purchasers to be able to check nearly all new cars and most new van models on a special website, which will launch this autumn. Vehicles included on the website will be given a ‘score’ based on their emissions. Currently, cars only have to pass Euro Standards emissions testing, which is limited to laboratory tests and had been proven to be unrealistic in real world conditions.

Mayor Hidalgo calling the TRUE initiative “a truly innovative study of the true emissions of vehicles” and emphasised the importance of the transparency which it will bring for good policy development and trust. Emphasising, as she had done in an earlier closed meeting with car manufacturers, that this was not intended to be “anti-car, but just anti-pollution”, Mayor Hidalgo also encouraged other cities to do the same. The C40 Initiative, which represents 640 million city dwellers, or a quarter of the World’s population, and which co-hosted the event, announced that many other cities had already indicated a willingness to do so.

The TRUE initiative is a partnership of several organisations including the FIA Foundation and the International Council on Clean Transportation (ICCT), which broke the ‘dieselgate’ scandal. Through on-road testing, research and awareness raising, the initiative is seeking to ensure an improvement in the understanding of the gap between tested and real world emissions in order to inform policy and consumer choices. The FIA Foundation has been focused on these issues for some time, supporting cleaner fuels and vehicles through a range of initiatives, and hosting a high level seminar on dieselgate in 2016 which convened world experts. A key conclusion of that report was the need for greater transparency and certainty about the real world emissions of vehicles.

Sheila Watson, Deputy Director of the FIA Foundation, who joined the Mayors for the announcement (see main photo above), said: “The FIA Foundation is delighted to be supporting such important work. Good policy and good consumer choices depend on good evidence, and this project will provide that. We would like to see other cities follow London and Paris's lead and work with us and our Real Urban Emissions initiative to get a more accurate picture of the vehicles on their streets too.”

Drew Kodjak, Executive Director of ICCT, said: “The ICCT looks forward to working with Mayor Hidalgo and Mayor Khan to improve air quality in their cities by better informing the public about actual air pollution levels from passenger vehicles. We strongly believe that data transparency coupled with policy is the most effective way of encouraging auto companies to build vehicles with durable emission controls.”

The testing by ICCT will be co-funded by Bloomberg Philanthropies and the Joshua and Anita Bekenstein Charitable Fund. “These new vehicle scorings will empower consumers to make informed choices that protect public health and the planet,” said Michael R. Bloomberg, C40 President of the Board and U.N. Secretary-General’s Special Envoy for Cities and Climate Change. “This is a great example of how the same steps that improve lives also fuel progress against climate change.”

Click here for more information on the TRUE Initiative